We are pleased to share this CBC news story with you that was released yesterday regarding our progress on the jurisdiction initiative. Congratulations to you all for your continued hard work and dedication to the initiative, it seems like the finish line is in sight!

Several First Nations in B.C. set to take full control over education on their lands

Advocates say it’s a move 50 years in the making.

In 1972, the National Indian Brotherhood — now the Assembly of First Nations — issued a policy paper called Indian Control of Indian Education. In 2022, at least four First Nation groups in B.C. are getting that control.

While most education is a provincial responsibility in Canada, First Nations education is under federal jurisdiction. But in 2006, the federal government passed legislation to allow individual First Nations in B.C. to take it over. (© 2022 CBC/Radio-Canada. All rights reserved)

The Band Members had Ratified Education Jurisdiction. 139 voted YES
The vote for education jurisdiction has passed with 96%.

Please join us in ZOOM about Education Jurisdiction

TO MEMBERS OF SEABIRD ISLAND 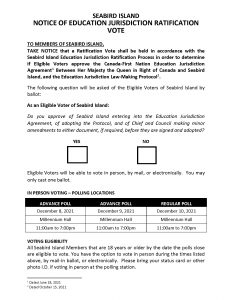 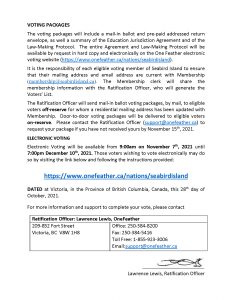 Electronic Voting will be available from 9:00 am on November 7th, 2021 until 7:00 pm December 10th, 2021.
Those voters wishing to vote electronically may do so by visiting the link below and following the instructions provided:

Seabird Island will inform Canada once it has successfully completed the ratification process. Then, Canada will take the final steps to ratify the agreements on their part.
Once Canada ratifies the Jurisdiction and Funding Agreements they will initiate budget transfers for governance funding and the parties will sign
the agreements.

Lastly, Canada will pass an Order in Council to recognize the First Nation as a Participating First Nation (PFN).
On the effective date, the PFN will begin exercising jurisdiction over education.

Seabird Island will be able to exercise jurisdiction in all areas of K4 -grade 12 education on their land in accordance with a Canada-First Nation Education Jurisdiction Agreement.

Some areas of authority will be jointly exercised with other participating First Nations through the First Nations Education Authority (FNEA).